“Father, Son”
“Sledgehammer”
“Blood of Eden”
“Games Without Frontiers”
“I Don’t Remember”
“Big Time”
“Lovetown”
“Red Rain”
“In Your Eyes”
“Don’t Give Up”
“The Barry Williams Show”
“Washing of the Water”
“Biko”
“Kiss That Frog”
“Mercy Street”
“Growing Up”
“Shaking the Tree”
“Shock the Monkey”
“Steam”
“The Drop”
“Zaar”
“Solsbury Hill”
“Digging in the Dirt”

The official launch of Play to the UK press took place last week at the Hospital in London’s Covent Garden.

Also in attendance where the ten lucky Lunatics and their guests who won our impromptu competition last week.

Speaking about the release Peter said “Although I believe that music can stand more repetition than video and music together, I have always been excited at the idea of putting pictures to music’. As a big film fan, some of my favourite directors have often managed to mix music and image very powerfully. I love to collaborate with inventive, visual people to put pictures to these songs. I have also been a long time fan of surround sound, which offers a great opportunity for musicians to take advantage of the medium. I love being able to listen from inside the music, rather than observing from the outside.”

The DVD will be released in the UK on Monday October 25th. 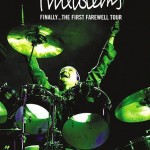 OLDERPeter Gabriel – A Family Portrait – Growing Up On Tour