Um and Aargh / Souvenir was the only single released to promote Sides the 1979 album by Anthony Phillips! An advert for the album appeared which was published/printed on the 24th March 1979

the advert suggested that the album had been released or its release was imminent.

Note: Souvenir was released within the album track listing in the reissue/remaster of April 2010. 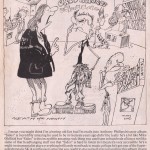