Here remarkably is a letter To The Manager of Colston Hall, Bristol from the promoter (John Smith Enterprises Agency) of The Selling England By The Pound tour (Uk Autumn leg).

The letter was sent/dated 26th September 1973 and it is correspondence to do with proposed show at Colston Hall, Bristol on the 16th October 1973, which went ahead. (The letter is signed Tony Smith)

Furthermore John Smith was a very successful promoter in the UK and Tony Smith was his son having worked hard with his father he gained a lot of knowledge about the music industry and when Genesis needed a new manager they approached Tony Smith because of his professionalism. Up until that point Genesis was being managed by their record company Charisma and its founder Tony Stratton Smith and his staff, hardly a healthy situation.

(Many thanks to Mino Profumo for this RARE letter) 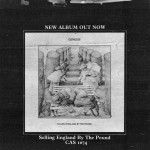