Phil Collins is the Double Winner at the American Music Awards.

(Many thanks to Mark Kenyon for this press sheet) 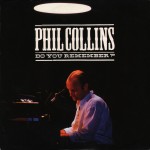 OLDERDo You Remember (Live) / Against All Odds (Live)